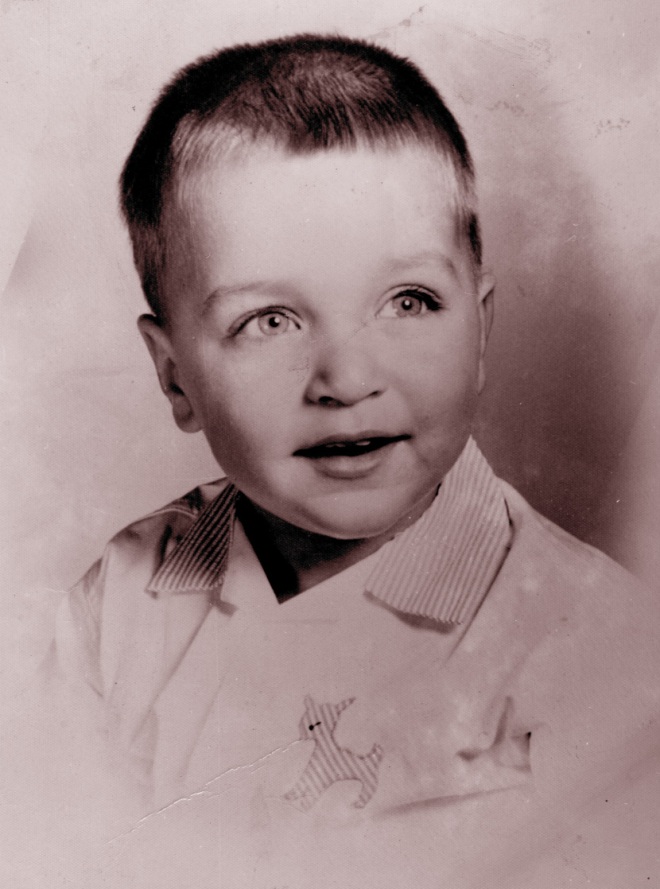 I don’t know how it is for you, but I am often harder on myself than on anyone else.  I can counsel with others and no matter what they have done I can usually nod my head sympathetically and show some understanding.  But not with myself.  Where I would forgive the shortcomings of others I often scold myself, wag my finger, and say, “How could you?!”  I tend to hold on to sins that God has forgiven long ago, sifting through them from time to time to remind myself just how wretched I really am.

And that’s where this picture comes in handy.

This is a picture of me when I was two years old.  I find that when I look at it I feel tender toward this little boy and far more forgiving than I might be otherwise.  I begin to understand that my inability to forgive myself can be crippling, in the same way Jesus understood that we cannot love our neighbors as ourselves if we cannot love ourselves.  It’s not that I use this picture to excuse my behavior, not that I look the other way and let “Little Jimmy” do whatever he wants.  It’s just that I begin to confront his behavior with love instead of anger, like someone who could be redeemed rather than someone who should be condemned.

When I started preaching 22 years ago, I started with the assumption that the preacher’s job is to get as many people as possible into the building for worship on Sunday morning, and then to get as many of those as possible to come forward at the end of the service so that they could make a profession of faith in Christ, or rededicate their lives to Him, or move their membership from another church to that one.

I don’t assume that anymore.

The more I read the Gospels the more I find Jesus trying to establish the Kingdom of God, “on earth as it is in heaven.”  He does it by calling disciples, training them, and sending them into the world as he himself was sent.  To be a disciple, then, is to be someone who is called and trained and sent.

For too long now we have built churches on the “attractional” model, believing that if we have a good enough preacher and good enough music people will come to us.  And in the era of the megachurch we also seem to believe that bigger is better, and that our success is defined by how many members we have and how much money is in the offering plate.  But author and activist Alan Hirsch talks about a “missional” model of doing church that is almost completely different.  Take the time to read the paragraphs below, and then click on “comments” to tell me what you think.

First, let me say what missional does not mean. Missional is not synonymous with emerging. The emerging church is primarily a renewal movement attempting to contextualize Christianity for a postmodern generation. Missional is also not the same as evangelistic or seeker-sensitive. These terms generally apply to the attractional model of church that has dominated our understanding for many years. Missional is not a new way to talk about church growth. Although God clearly desires the church to grow numerically, it is only one part of the larger missional agenda. Finally, missional is more than social justice. Engaging the poor and correcting inequalities is part of being God’s agent in the world, but we should not confuse this with the whole.

A proper understanding of missional begins with recovering a missionary understanding of God. By his very nature God is a “sent one” who takes the initiative to redeem his creation. This doctrine, known as missio Dei—the sending of God—is causing many to redefine their understanding of the church. Because we are the “sent” people of God, the church is the instrument of God’s mission in the world. As things stand, many people see it the other way around. They believe mission is an instrument of the church; a means by which the church is grown. Although we frequently say “the church has a mission,” according to missional theology a more correct statement would be “the mission has a church.”

The attractional model, which has dominated the church in the West, seeks to reach out to the culture and draw people into the church—what I call outreach and in-grab. But this model only works where no significant cultural shift is required when moving from outside to inside the church. And as Western culture has become increasingly post-Christian, the attractional model has lost its effectiveness. The West looks more like a cross-cultural missionary context in which attractional church models are self-defeating. The process of extracting people from the culture and assimilating them into the church diminishes their ability to speak to those outside. People cease to be missional and instead leave that work to the clergy.

A missional theology is not content with mission being a church-based work. Rather, it applies to the whole life of every believer. Every disciple is to be an agent of the kingdom of God, and every disciple is to carry the mission of God into every sphere of life. We are all missionaries sent into a non-Christian culture.

Missional represents a significant shift in the way we think about the church. As the people of a missionary God, we ought to engage the world the same way he does—by going out rather than just reaching out. To obstruct this movement is to block God’s purposes in and through his people. When the church is in mission, it is the true church.

Please excuse my silence over the past few days. My weekend was packed and now I’m on my second day of an off-site staff retreat where we are discussing what it means to be “missional.”

If you have time, you can read the short article we’ve been looking at (click here) and help us answer the question: What’s the difference between saying “The church has a mission” and “The mission has a church”?

Until the next time I’ve got time, 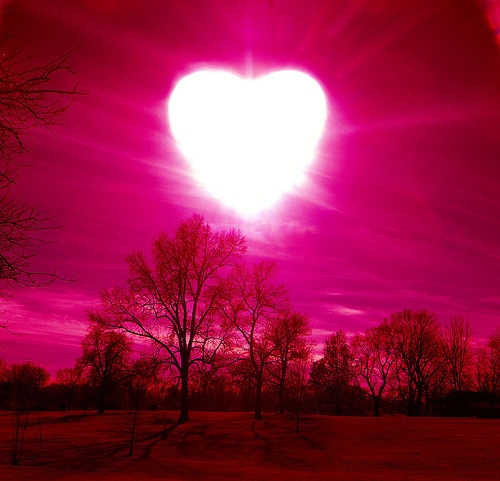 In just a little while I’ll be doing the funeral of Nancy LeSac, a faithful and courageous church member who died on Monday morning after a long struggle with brain cancer.  Her story reminded me of Joyce Maye, a member of my church in Wingate, North Carolina, who died after a very similar struggle.  I found the text of the message I delivered at her funeral and wanted to share an excerpt here as a reminder that even—and perhaps especially—in tragic circumstances, the gospel is good news.

The writer of that great poem we call the Song of Solomon says that “love is strong as death” (8:6), and I almost believe that he is right.  Love is strong!  It can haul you out of the pit.  It can put you on your feet again.  It can set your heart soaring.  It’s strong!  But so is death.  It can cut your legs out from under you.  It can smash you to the ground.  It can snuff your life out like a flame.  When we think of how love makes us feel, and how the death of a loved one makes us feel, I think we can agree that Solomon understood something that is common to human experience.  Love is strong as death and death is strong as love.  Exactly as strong.  The more love we have for someone the more it hurts when we lose them.  The less love we have the less it hurts.

In Joyce’s case this harmless piece of poetry becomes a terrifying equation.  She was so easy to love that many of us—most of you here—developed a love for her that was unusually strong.  As a consequence, the fact of her death has hit us with such force that we don’t know if we will be able to stand up against it.

When I heard the news I was at Travis Family Restaurant, having lunch with my friend Jim Eastin.  A waitress came to tell me I had a telephone call and Christy, in a broken voice, broke the news to me.  I came back to the table and sat down hard, feeling the color drain from my face as I did so.  Jim tried to resume our conversation but suddenly stopped, reached out to touch my arm, and said, “Are you all right?”  “I don’t know,” I said, finally.  “I don’t know.”

For the rest of that day that’s how it was for me.  Love and death had collided at full speed, and the wreckage was everywhere.  I went to be with the family but I don’t know how much help I was.  After the initial hugs and condolences I simply sat at the kitchen counter, sighing and shaking my head.

If all we could depend on was our own love in time of death we might never know if we were going to be all right.  Love and death are equally matched; it could go either way.  But at the foundation of our faith is the truth that God has added to our love his own.  “God loved us so much,” The Bible says, “that he gave his only son, so that anyone who believes in him will not perish, but have everlasting life” (John 3:16).  In other words the force of God’s love, in combination with ours, is too much for death.  What once looked like an even match becomes suddenly, miraculously, one-sided, and death doesn’t stand a chance.  “O death, where is your victory?” Paul says.  “O death, where is your sting?” (1 Cor. 15:55).  And as death lies dying at our feet he shouts, “Thanks be to God, who gives us the victory through our Lord Jesus Christ!” (1 Cor. 15:57).

What all this means is that Joyce was right when she said to me, more than two years ago, “I believe I’m going to be all right.”  By virtue of the strong love and amazing grace of God she is all right this morning.  Strong as death is it will never be strong enough to snuff out the light that was and is…