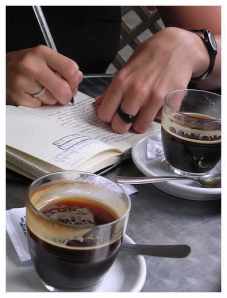 It’s a little after six a.m. on my day off.  I don’t know why I’m up, but here I am, sitting at the kitchen table and sipping some freshly brewed Caffe Verona as I contemplate the day ahead.

I’m remembering that before I ever started blogging I used to do something called “Jim’s Online Journal,” and I used to do it on my day off.  Typically, I would go for a mid-morning run, and then while I was cooling off afterward I would sit at the computer and highlight the previous week, writing about significant events, discoveries, and breakthroughs.  When I was finished I would send it to twenty or thirty friends and family members by e-mail.  Some of them read it and some of them didn’t, but it did me good either way to reflect on the events of the previous week.

I remember hearing Tony Campolo talk about a survey conducted among people ninety years old and older who were asked: “If you had your life to live over again, what would you do differently?”  There were lots of answers, but the majority of them fell into three categories: 1) I would risk more, 2) I would reflect more, and 3) I would do more things that would live on beyond my death.  The online journal was a way for me to “reflect more,” to think about my life instead of just living it from day to day.

In some ways it was a continuation of the journaling habit I started in seminary: at the suggestion of one of my professors I began a prayer journal that I kept up more or less faithfully until just a few years ago.  I filled up a dozen or more notebooks and composition books with my prayers for the day which often, of course, included the details of my life, the struggles I was facing, the thoughts I was having.  I miss that, and I’m not sure how I fell out of the habit except that life can get busy and we often neglect the things that are most important in favor of the things that are most urgent.  Maybe 2010 will be a good year to get back into that good habit.

Anyway, I’m almost to the bottom of my coffee cup and starting to think about cooking some oatmeal, but let me leave you with a brief excerpt from “Jim’s Online Journal.”  And like those people I used to send it to, you are free to read it or move on to other, more important things.  Like breakfast.

In the last few weeks I have been to the mountains with my friend Jim Eastin, entered and finished a triathlon in Charlotte, been to the beach with my own dear family, been to Houston with a bunch of Baptists, and been to work day after day after day.  Even though summers are easier around Wingate, this is one summer where things have been only slightly easier.  I find my tongue hanging out at the end of a hot day, and find myself wondering when the relief will finally come.

I thought I would have a break last week with a day off on Thursday and a long holiday weekend.  I found out on Wednesday that we would be closing on our construction loan today (Monday).  So the next day I got up early, borrowed a chain saw, went to the lot and began to cut trees, clearing a space for our new home.  I worked all day, until I was cross-eyed with fatigue, but I wasn’t finished.  I went back the next day and worked until dark.  Still not finished.  Saturday at 2:00 p.m. I dragged the last limb to the brush pile and drove home, sweat-soaked and bone-weary.  Even though the rest of this project will involve considerable time and energy, I hope it’s not this kind of time and energy.  I went to the office this morning in a starched shirt and silk tie feeling as though the vacation had come at last.

And one more thing.  That same Saturday that I came home so hot and tired we had a cookout at the house for the kids from the trailer park–two more hours of sweating in the sunshine.  One of them, a new kid named Jason, confided in me that his only real problem was his dad.  “He’s been in prison since before I was born,” Jason said, matter-of-factly.  “He’s going to get out this summer.  We talked on the phone.  We talked about building a log cabin together.  But last week he called me and told he was just going to disappear.”  And once again, my heart breaks for one of these kids.  But that’s not all.  “My mom lied to me,” he says later.  “She told me my grandmother died of a heart attack, and the death certificate did say something about her heart, but I found out her husband shot her a couple of years before I was born.”

“How old was your mother?”

“Yep.  She was pregnant once before that, when she was ten, but she miscarried.”

This from a boy who says he has only one problem.

Whenever I hear these stories my own story seems hardly worth mentioning.  So what if I spent three days working with a chain saw?  So what if I’m building a house, going to the beach, entering a triathlon?  All these things seem irrelevant beyond description in comparison with this one life, this eleven-year-old life that has been so hammered by hardship you wonder where that lopsided grin, that wayward lock of hair, came from.  How did they survive?  And what can I do to make sure they don’t get lost in the weeks and months ahead?

Pray for Jason, friends, and pray for Jim.  Don’t let me get so caught up in my own life that I fail to catch those who are falling.