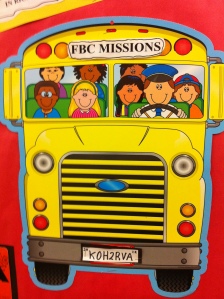 I’ve had this fear that First Baptist Church’s year-long, every-member mission trip called KOH2RVA might not make it all the way through to the end, that it might get off to a good start but then, halfway through the year, sputter to a stop.

That fear was unfounded.

If anything, it seems that our mission to bring the Kingdom of Heaven to Richmond, Virginia, has been picking up speed lately, making a final sprint to the finish line on September 8.  On Wednesday night I was sitting at the supper table with a half dozen of our members when Emily Johnston came over to say hello.  I had been wanting to see her, to tell her that I had received the message below:

Hope to see you tonight, but if not, wanted you to know that Bill and I went over to Essex Village yesterday and had a grand time! It gave us a chance to work with children again, and that in itself, was great…the children, as you know, I’m sure, are very well behaved and most of them really want to learn. I can tell you more about our enthusiasm when we see you; it would be nice if more folks would give a little time to these people… the little ones still talk about Pakistan, where they were born.

Talk to you soon.

We talked for a while and as we did I looked around the table and realized that every person there had gotten “off the bus” and onto the mission field this year; in other words, there was 100% participation in KOH2RVA.  And this was not the elite missionary corps I was sitting with; these were “regular” church members who have begun to think of themselves as missionaries.

I know that what was true for my table on Wednesday night is not necessarily true for the entire church, but I was encouraged by what I saw—greatly encouraged.

I could almost hear the Kingdom coming closer.