Editor’s note: A few weeks ago Beth Fogg told me such a good story I insisted she write it up and submit it for publication.  She did.  She wrote it up and sent it to me.  So, I’m publishing it here and hoping you will find it as encouraging as I did.  Thanks for sharing, Beth!

I am privileged to be one of the many people who gather in the basement of Richmond’s First Baptist Church on Wednesday mornings for Community Missions.  There we gather as a team of volunteers to pray for each other and for our guests as we prepare for their arrival.  Then we welcome our guests with a brief time of devotion and prayer before working together to meet the needs of our homeless and near-homeless brothers and sisters for hot showers, clean clothes and food.  It has become a real community for me, and is one of the highlights of my week.

It is a place of trust and caring.  We all pray for each other, joke with each other, and love each other.  The fellowship is real.

On a recent Wednesday, two different guests brought something for us.  One guest brought a bag of clothing, newly washed and neatly folded, that she no longer needed.  She wanted to share back with others who have needs.  Another friend brought a bag with a variety of items to donate back, including about 20 washcloths.  We had just been discussing that we were running low on washcloths when the gift arrived!

I can only recall one previous time that I received a gift from a homeless person.  It is a humbling experience.  As a person who has more than she needs, I am motivated to come closer to the spirit of the early Christians described in Acts 4, as they made sure that none of the fellowship was in need.

I am thankful to be part of a church that shares love with our neighbors and receives it back from them! 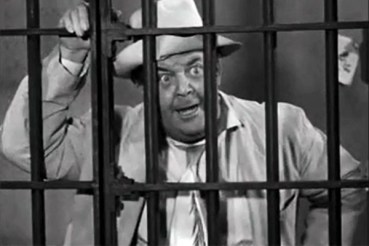 I had only been married a year.  I had a wife at home who was depending on me for income.  I didn’t know what to do.

So, I called my dad, and he said, “Son, I believe everybody should get fired at least once, and spend at least one night in jail.”

That didn’t really help much, but it was an interesting thought.  A few years later, when I was in seminary, I thought I would try that other thing dad mentioned, spending a night in jail.  I had a friend at seminary who was just crazy enough to try it with me.  So, what we did is go to the county courthouse and sit there all morning waiting for the judge to work through his other cases.  When everyone else had gone he looked at us and said, “What are you here for?”

I said, “May I approach the bench, your honor?”

He said yes.  I came up and said, “My friend and I are students at the seminary.  We think it would be a good experience for us, as future ministers, to spend at least one night in jail, so we’ll know what it’s like, and so we can have more understanding and empathy for people who find themselves in such unfortunate circumstances.”

He said, “You want to spend a night in jail?”

He laughed and said, “Well, I’d love to accommodate you boys, but the truth is, my jail is full.  We got three inmates in cells built for two.  You might go over to the next county and see if you have any more luck.  And so we did.  We spent all afternoon in another courthouse, but at the end of the day the story was the same.  They didn’t have room for us.

So, I still don’t know what it’s like to spend a night in jail, but maybe some of you do, and maybe you know that for all the things you could complain about there are some things that are not so bad.  I heard someone trying to look on the bright side once who said, “Well, at least you get three hots and a cot!”  And what he meant was three hot meals a day and place to lie down at night.

And some people seem to be more comfortable with that than with freedom.

In our Old Testament lesson for this Sunday God’s people have escaped their slavery in Egypt, they have been led out into the wilderness by God’s mighty hand, but there, in the wilderness, they begin to miss the comforts of their old life.

“Oh, that we were back in Egypt,” they moaned, “and that the Lord had killed us there! For there we had plenty to eat. But now you have brought us into this wilderness to kill us with starvation” (Exodus 16:3).

Freedom isn’t easy for any of us, but God seems to believe it’s worth it.

I hope you will join us for worship at 8:30 or 11:00 this Sunday at Richmond’s First Baptist Church, in person or via our LIVE webcast at www.FBCRichmond.org.