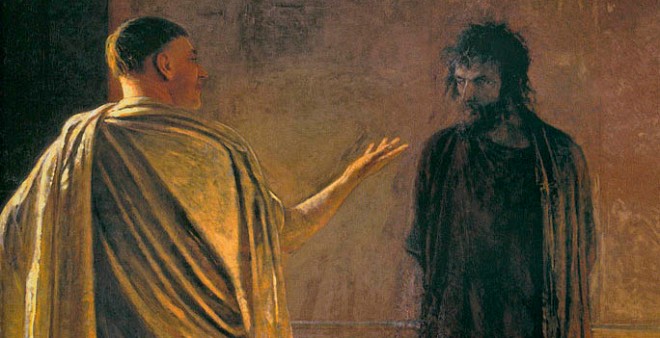 In my sermon for Christ the King Sunday I imagined how things might have been different if the religious and political authorities of Jerusalem had accepted Jesus rather than rejecting him.  I wrote an alternative ending to the gospel story.  Much of it is actually from the Bible.  Some of it is not.  If you are a good biblical scholar you may be able to tell which Gospel I’m using, where I stray off the familiar path, and when I quote from other parts of the Bible.  Ready?  Here we go:

Now the great crowd that had come to the Festival of the Passover heard that Jesus was coming to Jerusalem.  So they took branches of palm trees and went out to meet him, shouting,

“Hosanna!  Blessed is the one who comes in the name of the Lord—the King of Israel!”

Jesus found a young donkey and sat on it; as it is written:  “Do not be afraid, daughter of Zion.  Look, your king is coming, sitting on a donkey’s colt!”

Then he entered Jerusalem and went into the temple; and when he had looked around at everything, as it was already late, he went out to Bethany with the twelve.

On the following day, when they came from Bethany, he was hungry. Seeing in the distance a fig tree in leaf, he went to see whether perhaps he would find anything on it. When he came to it, he found it loaded with figs, even though it was not the season for figs.  Peter asked him, “Rabbi, how is it that the fig tree has figs?”  Jesus answered, “O ye of little faith!  Did I not tell you that if you only believed God’s kingdom would come?”  And they all ate and were filled, and afterward took up twelve baskets full.

They came to Jerusalem. And he entered the temple and began to drive out those who were selling and those who were buying in the temple, and he overturned the tables of the money changers and the seats of those who sold doves; and he would not allow anyone to carry anything through the temple.  He was teaching and saying, “Is it not written, ‘My house shall be called a house of prayer for all the nations’?  But you have made it a den of robbers.”

And when the chief priests and the scribes heard it, they were cut to the heart and said to Jesus, “What should we do?”  He said to them, “Repent, and be baptized every one of you so that your sins may be forgiven.”  Now the Pool of Bethesda was there, and seeing it one of the scribes said, “Look, here is water!  What is to prevent us from being baptized?”  And Jesus, looking on him, loved him, and said, “You are not far from the kingdom of God.”  So those who welcomed his message were baptized, and that day about three thousand persons were added.

The next day they took Jesus to the governor’s headquarters, but did not enter it, so that they would not be defiled, but could eat the Passover.  So Pilate went out to them and said, “What do you say about this man?” They answered, “We have come to believe that he is our long-awaited Messiah, the Christ, the King of the Jews.”

Then Pilate entered the headquarters, summoned Jesus, and asked him, “Are you the King of the Jews?” Jesus answered, “I am.”  When Pilate heard these words, he was troubled, and all Jerusalem with him.  And calling together all the chief priests and scribes of the people, he inquired of them where the Messiah was to be born. They told him, “In Bethlehem of Judea.”  Pilate asked Jesus, “Were you born in Bethlehem?”  Jesus answered, “I was.”  Then Pilate brought him outside and said to all the people, “Here is your King!”

And the soldiers dressed him in a purple robe and put a crown on his head.  They kept coming up to him, saying, “Hail, King of the Jews!”  Then they lifted him up on their shoulders, and carried him through the streets to the citadel of David, and the crowds lining the streets were shouting, “Hail, King of the Jews!  Hosanna in the highest heaven!”

As they went they saw a man who had fallen among thieves lying by the side of the road and a priest, when he saw him, was moved with compassion.  He went to him and bandaged his wounds, having poured oil and wine on them.  And a certain Levite, when he saw him, put the man on his own donkey, brought him to an inn, and took care of him.  Jesus said, “To such as these belongs the Kingdom of Heaven.”

They put him on the throne of his ancestor David.  And Pilate took off his own crown and laid it at Jesus’ feet.  He said, “Now the kingdom of this world has become the kingdom of our Lord and of his Christ, and he shall reign forever and ever.”  And suddenly there was with the crowd a multitude of the heavenly host, praising God saying, “Glory to God in the highest heaven, and on earth peace, good will toward men.”  Pilate and his legions left the city that very day, returning to Rome, and Jesus ruled Israel from his ancestor’s throne, and there was peace on earth, forever and ever.  Amen.

Of course, that’s not the way it actually happened.  But that doesn’t mean you can’t write an alternative ending to your own story.  If you have been rejecting Christ as king for far too long now, imagine how things might be different if you accepted him, if you stepped down from the throne of your own life and let him sit there instead.

I know: I’m preaching.  But that’s what I do.  If you want more it’s available.  Click HERE for the full text of Sunday’s sermon.  And whether you do or don’t, have a beautiful day today.  Remember: you may live in the United States of America, but

One thought on “An Alternative Ending”