I’m back from two weeks in Mexico, and, as promised, there are stories to tell:

I started my adventures in Puerto Escondido, a little town on the Pacific coast of Mexico popular with surfers for its enormous waves.  I didn’t go there to surf: I went because my brother-in-law, Chuck Treadwell, was celebrating his fiftieth birthday and invited me to come along.  We stayed in a beautiful house near the beach which was available partly because Chuck has some very generous friends but partly because it is so hot in Puerto Escondido in May that no one in his right mind would go there.

We tried to make the best of it, however, and in one three-day period I caught a 70-pound sailfish, got up on a surfboard, and went swimming with the dolphins.  In the interest of full disclosure I should probably say that I “helped” catch a 70-pound sailfish: the first mate on

the boat actually set the hook, Chuck and his friend Patrick McCoy spent about thirty minutes fighting the fish, and then they let me reel it in toward the boat where the first mate brought it aboard.  And when I say I “got up” on a wave I mean that I was able to get to my feet on a ten-foot board (the surfing equivalent of training wheels) at Carrizilillo Beach (the Puerto Escondido equivalent of a baby pool).  And, finally, when I say that I went “swimming with the dolphins” I mean that I put on a life jacket and jumped into the water in a part of the ocean where we had just seen some dolphins.  I swam, and there were dolphins in the same ocean, but to say that I swam with the dolphins is a bit of an overstatement.

I went from Puerto Escondido to my brother Ed’s house near Cuernavaca.  Ed is a missionary there.  He and his family have been living and working in Mexico for eight years, mostly developing a Christian camp where he hopes to reach 10,000 Mexican youth for Christ.  When I got there it was nearing the end of the dry season, and most of Mexico was parched and brown.   And hot.  Did I mention that it was hot?

Ed’s characteristic solution was to try climbing to the top of a 17.000-foot mountain, a dormant volcano called Iztaccihuatl (which I won’t even try to pronounce).  He promised that it would be cooler up there than it was in Cuernavaca.  In fact, he had asked me to bring along all the winter clothing I could stuff into a backpack so we could stay warm during the climb. 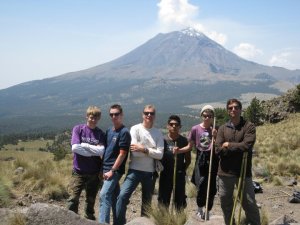 We took along two of his sons and two of their friends and made our base camp at 12,000 feet.  We spent the whole next day getting acclimated to the altitude (and the delightfully cool temperatures) before starting our assault on the mountain at 3:00 the next morning.  I went up with the first party—three of us, sporting head lamps to cut through the darkness.  We got to 15,000 feet just as the sun was coming up and spent the next four hours gasping for air and clawing our way up to the summit only to discover that there was another, higher, summit about a half mile away.  We hiked down into the notch and up the other side, using the last of our strength to get to that summit only to discover that there was yet another, higher, summit about a mile away from that one, and it was on the other side of a half-mile-wide glacier.  We sat there for a while, catching our breath and watching as another group of climbers made its way across.  As we were watching one climber slipped and fell and started sliding downhill toward a rocky ravine before stopping himself with an ice axe.  Since we didn’t have ice axes (and honestly, if there had been an elevator to the summit at that point I’m not sure I would have had the strength to push the button), we decided to call it a day.  Our elevation at that point was 16,800 feet, about 300 feet shy of the highest point.  We were disappointed, but not defeated, and on the way down began to talk about coming back again someday with the proper equipment.

The rest of the week was less adventurous but deeply meaningful as I learned more about the good work Ed is doing there at El Monte (the name of his camp).  I heard reports from Mexican missionaries, who are being trained to go to places like Germany and Indonesia with the good news about Jesus.  I saw Ed’s plans for adding additional cabins and another soccer field to the camp, to make it even more inviting for the kids who will come there.  And I did some sightseeing in the little town of Ticuman, where a generous farmer gave us a complimentary bunch of bananas (see photo above).  I picked up enough Spanish along the way to negotiate the taxis and buses necessary to get back to the airport, and at 9:35 last night I touched down in Richmond.  It felt so good to come home, and to unlock the front door, and crank up the air conditioning.

There are some things I’m not going to take for granted anymore.