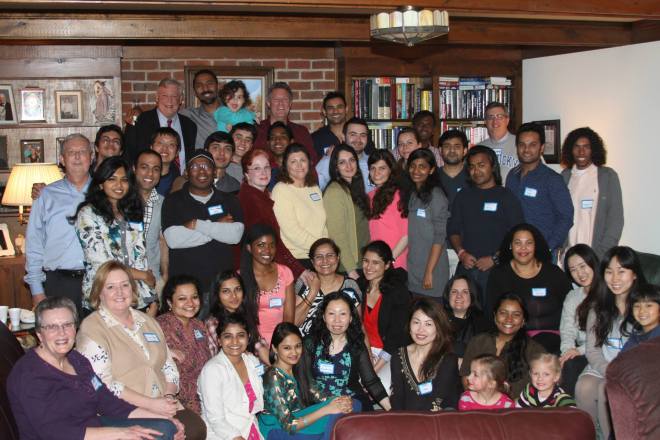 Yes. This is what I think radical hospitality looks like: a gathering of international students from VCU at the home of Louis and Linda Watts, with other graduates of the Ralph Starling School of Radical Hospitality (including Ralph Himself) proudly present and…having a wonderful time. Who knew bringing heaven to earth could be so much fun?

I didn’t make it to Bible school yesterday and it was my loss. Appointments and commitments that started early in the morning kept me busy until just before lunch. But I heard great things about the opening day of “Camp 2” at Richmond’s First Baptist Church and after lunch I drove out to Essex Village Apartments to see what happens when Bible school goes on the road.

In yesterday’s post I talked about the partnership between First Baptist and Park Meadows Baptist Church in Waxahachie, Texas, and how the two were collaborating to bring Bible school not only to First Baptist Church, but also to Essex Village Apartments, where there are 544 children, many of whom live in single-parent homes.

I got there early, before the afternoon session of Bible school began, but in time for a pick-up game of kickball. And once again I got to watch that old miracle occur, where people who don’t know each other overcome their initial awkwardness through some silly game, and then begin to laugh and play together, so that by the end of the day they are BFF’s (Best Friends Forever). What breaks my heart is that the kids at Essex Village are so hungry for attention

But today is only Day Two of Bible school, and the end of the week seems a long way away. So, if you’re looking for a little joy in your life, and for a way to make a difference in someone else’s, then come on out to Essex Village around two o’ clock this afternoon. Bring your sunglasses and bottled water and big, floppy hat, because it’s going to be hot, but wear your kickball shoes, because it’s going to be fun. I predict that by the end of the day miracles will have occurred at Essex Village, and the Kingdom of Heaven will have come a tiny bit closer to Richmond, Virginia. 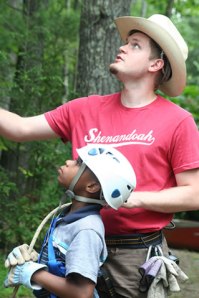 Sometimes the best way to bring the Kingdom of Heaven to Richmond, Virginia, is to get out of town. At least, that was the thinking of a few bold women who started “a little camp for city kids” nearly a hundred years ago.

Last night Beth Reddish Wright told us the story of Camp Alkulana, a year round mission of the Richmond Baptist Association with a targeted summer ministry to inner city children. Here’s what the web site says:

The camp has been in continuous operation since it began in 1915. The kerosene lanterns, which shone from the windows of the first cottage, appeared as bright eyes shining through the forest. Thus, the Indian word, “Alkulana,” meaning “bright eyes” became the official camp name.

Camp Alkulana is located in Millboro Springs, Va, deep in the Alleghenies. The proximity of the camp to the George Washington National Forest provides it with boundless space and endless program resources. Some of the activities offered during the summer are hiking, cave exploring, camping out, cooking out, rock climbing, rappelling, ropes course, swimming, crafts, Bible study and worship.

Though the camp is in Millboro Springs, we consider our ministry in Richmond because we serve the children and youth of Central Virginia. Throughout the year in Alkulana offers ongoing supports in Richmond to its campers through large group gatherings, a mentoring program for older campers, and a targeted leadership program for its junior counselors.

Camp Alkulana’s Mission is to reveal God’s love to low-income and at-risk children and youth of Central Virginia so that they might realize the intrinsic value in themselves and others.

Beth told us the story of a girl named Jo-Jo who was afraid to join the other campers in jumping off a rock into the river. The rock was high, and when she looked down she thought, “Uh-uh. I like my life, and I love to live.” She was scared. But everybody else was jumping and splashing into the water and coming up laughing. Finally her counselor yelled, “Scary things make good memories!” And so she did it; she jumped.

It was so much fun she did it all afternoon. And later? She remembered what her counselor said: “Scary things make good memories.”

Maybe we should say it like this: some kinds of scary things make good memories. Jo-Jo was from Gilpin Court, one of the poorest neighborhoods in Richmond. Drug deals go down in that neighborhood all the time. People sometimes get shot and killed. But for a little while last summer she got away from all that. She went to a place where she could see the beauty of God’s creation all around her, where people were kind to her and shared the love of Christ with her, and where the only scary thing was the idea of jumping off a rock into the river. I can almost picture her asking: “Is this heaven?” and I can almost hear someone answering,

Every year at First Baptist we take up a special offering for Camp Alkulana. This year, as we continue our year-long, every-member mission trip to bring the Kingdom of Heaven to Richmond, Virginia, you might think of your offering as a way to do that: as a way of getting kids like Jo-Jo out of the city long enough to experience heaven on earth.

I’m planning to double my offering this year. I hope you will do the same.

Today’s guest blogger is Lynn Turner, Senior Associate at Richmond’s First Baptist Church, who was at Glen Lea Elementary School yesterday for an event that definitely brought the Kingdom of Heaven to Richmond, Virginia.  Thanks, Lynn, for writing, and thanks Janet Chase, for the pictures! 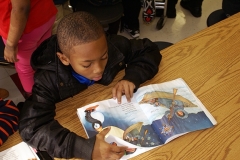 It began with a need….450 plus students at Glen Lea Elementary School who did not have books of their own so they could practice their reading at home. This need soon caught the heart and passion of Raylene Harton and Theresa Norton from Richmond’s First Baptist Church, and Schuyler Davis at the Children’s Museum of Richmond. Before you knew it another KOH2RVA initiative was born. 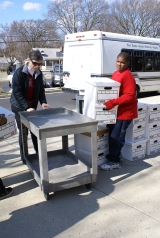 We settled on a theme—“Love to Read”—and picked a date—Valentines Day—as a way of encouraging kids to read. Kimberly Lee, the principal of Glen Lea, loved the idea! Contests were announced to all the students that the top three classes that met their reading goals within a six-week period would earn a pizza party with “Seymour the Dinosaur” (the Children’s Museum mascot), sponsored by the museum and First Baptist Church.

The word went out to our congregation, “We need books! Lots of books!” and the books poured in. By the end of the drive we had enough to put a book in the hands of every student at the school, extra books to give to the teachers in each grade, and several bins of used books to start a library at Essex Village Apartments. 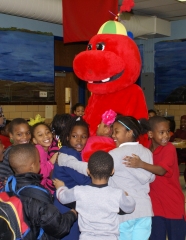 On Valentines Day, we headed to Glen Lea for our party with the top three classes. You should have heard the screams of delight as the principal announced over the intercom who the winning classes were! They came pouring out of their classrooms to the cafeteria to enjoy games, eat pizza, hug Seymour, and show off their brand new books! Thank you First Baptist Church for putting smiles on every child’s face at Glen Lea Elementary School today with books they could call their own and take home! 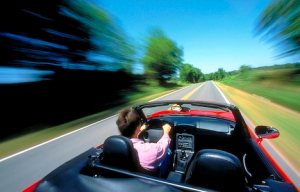 On Tuesday I asked our staff to think about the relationship between “mission” and “institution.”

I was still working on the question of how we measure success and it occurred to me that institutional success might look different than missional success. In other words, you could have a church full of people and offering plates full of money without ever doing the things Jesus told you to do. The institution would be successful, but the mission would not.

On the other hand, you could have a church so radically committed to the mission that its members never came to church or put their money in the plates. They would all be out there on the mission field, bringing heaven to earth. The mission would be successful but the institution would not.

Ideally, there would be a balance between institutional and missional success: the church would be full of people who came gladly, gave generously, and then went out onto the mission field to do what Jesus told them to do.

So I said to the staff, “See if you can fill in the blanks: ‘Mission is to institution as _____________ is to _____________.’” And then I let them think about it. Let me ask you to think about it for a minute before reading any further. What is the proper relationship between the mission and the institution?

Got it? OK. Please post your answer below by clicking on the word “comments.” And then consider some of these responses:

“Mission is to institution as education is to school.”

“Mission is to institution as transportation is to car.”

“Mission is to institution as baking is to oven.”

“Mission is to institution as fun is to games.”

So, can you imagine a big, beautiful school where nobody ever learned anything? Or a shiny new car that simply sat in the garage? Or a $10,000 oven that never baked a cake? Or a game that felt like more work than fun?

Ideally, there would be a perfectly balanced relationship between the mission and the institution. So you would have a big, beautiful school where lots of learning went on. A shiny new car that would get you where you were going. A $10,000 oven that baked the best cakes in town. A game that left you panting and sweating and laughing out loud.

And, ideally, a church full of happy, healthy people, who came together to worship, love, and learn, and then went out to turn the world upside down.